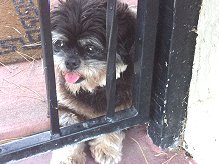 I was lucky enough to live in the South Park neighborhood of San Diego for a few years, which is probably THE most dog friendly place in the world. It's not South Park, it's South Bark--which is also the name of the doggie wash store around the corner.

San Diego has several "dog parks" specifically for dogs to run unleashed, followed around by their owners religiously tending to poop patrol.

South Park has several food establishments and even some bars that have dogs-welcome policies. I visited the Whistle Stop Bar with my dog Wookie, sat on a barstool and put Wookie on another. The barkeep came up and asked Wookie, "What'll ya have there, Shorty?"

I'd say 80-90 percent of South Park residents have at least one dog, so as people filter back home from their workplaces, the sidewalks fill up with dogs, leashes and their owners. It's a much more social place than most I've lived in because of the dogs. If nothing else, you can talk about your dogs. I know dog's names when I didn't know the owner's name!

Dogs seem happiest with routine, and I don't know if that's because humans are, or if dogs by themselves are, but the combination of dog + human is a study in routine. Dogs seem to respond to repeated actions. They can remember practically every place there is a good smell, and the exact route to the dog park. I'm impressed with this because I think dogs use different perceptions than we do to arrive at the same information, which is fascinating to me.

Wookie, because of a congenital and chronic eye condition, is mostly blind, and yet she lunges forward, fully the alpha dog, fearlessly and happily tracking down the next smell, almost oblivious to curbs, fences, telephone poles and yard signs--all of which she's run into before I got a chance to steer her clear. The enthusiasm dogs have for the littlest things is an inspiration. Wookie will spend a full minute, or two, carefully sniffing some exotic odor like some sort of wine connisseur, lost in some deep concentration that no manner of distraction can break.

Dogs are also completely in the NOW. If nothing is going on for them, they sleep. If something starts happening, they are fully awake, engaged and loving the action. It's a wonderful model to me about how to live in the present moment. Dogs' enthusiasm for their lives is infectious, too, and I think that's why humans love them so much. The dog's simple responses and unbridled focus seems to somehow bring back those ancient human days when we were simple and wild.