This Quantum Life #98 - Surrendering in the Opposite World

Surrendering in the Opposite World 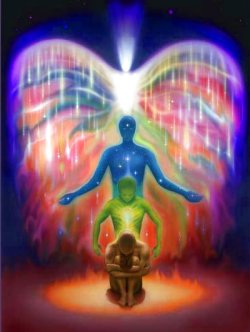 Have you ever overheard a conversation and although the person speaking wasn't talking to you, what they said stuck with you? I had that happen a few months ago sitting in a coffee shop. There was an older man wearing a priest's collar, aiming some intense comments at a disheveled, tattooed and defiant young woman. "You'd better get on board with what's happening, or you're gonna be sick and depressed for the rest of your life," preached the reverend. The girl looked away, and then in my direction with a perplexed look. She then, without a word, promptly got up and left the building.

Although I had no context for the reverend's comment, for some reason it struck a chord with me. I've written in previous articles about the value of "getting on board with difficulties", in order to stop the cycle of repeating unwanted circumstances, so I guess the good preacher must have read them.

As I reflect once again on this strategy of "on board-ness", there is a deeper level to it, and it has to do with surrender. One of hallmarks of youth is having a good degree of "fight". You're young, usually with something to prove, and the world doesn't so easily conform to expectations. So, with youthful energy, many of us chose to battle our way to what we want. The upshot of this struggle is that by the time you get to grandpa's age, the futility of fighting becomes blatantly and sometimes embarrassingly obvious.

Not that everyone stops fighting when they get old--I know several folks who have turned bitter and recalcitrant, refusing to let go of their convictions about how life has wronged them. God knows, my own life certainly has plenty of cannon fodder should I have decided to go there, but something snapped in me a while back, and keeps me raising a white flag of surrender.

The ego lives in a sort of "opposite world", where everything it wants is in some way the reverse of the way things are. It then figures it must go to war against all this opposition, even though the opposition it sees is simply a reflection of its own resistance.

We get comfortable with resisting experiences we don't like, turning rebellion into a habit of lost causes. As if "doing something" is the only choice we have, and changing how we are being is just, well, off the table. We "fight" disease, we wage war on injustice, and we rail against all manner of inequities perceived in the world when all along, these "enemies" are nothing more than the unfolded perfection at the end of the fight.

By surrendering our fight within the Opposite World, we are no longer energizing our opposition to present circumstances. We begin to allow the light in; we become what it is we were fighting for. The world becomes a realm of emergent potentials, full of grace and opportunities for love and compassion.

The act of surrender is the supreme act of coming into being. All that the fight was about is discovered to be only the resistance to being fully present as the true and unfettered love that we are at our core. That light, that love, is the transformative agent that in any given moment dissolves the Opposite World and brings into being the peace, grace and reward of surrender.

This is making the Universal Agenda our own agenda, completely and deeply trusting that the highest and greatest outcome is inevitable because we are powerfully allowing it, by our surrender, to arrive.

What may seem like an unwanted circumstance only requires the surrender of a personal agenda to reveal the cosmic genius of the bigger picture. We actually don't know enough to resist our situation, so by giving up the resistance, the true reality of goodness can shine through, bringing hope and healing with it.

Spiritual adept, Matt Kahn, speaks of an "enthusiastic embrace" of all things challenging to us. By surrendering to the threatening energies, and by coming into fully being in the moment, we transform harshness into softness, negativity into compassion, and ugliness into beauty.