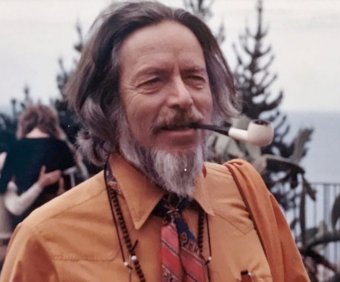 It was around 1973, when I was in Los Angeles, that I would listen on the radio every Sunday night to Alan Watts lecture on NPR. He always seemed to have a message for me, and at the time--being a tender 21 year old searching for the meaning of life--Watts was a godsend.

One point he made stuck with me: You are what the Universe is doing, like a wave is what the whole ocean is doing. He spoke of how deep, deep down, far, far in, you are the entire universe--and yet, because it is so natural, so native, we don't think anything of it. Our creation of the universe is something we do automatically as a result of being who we are. And, until we wake up to this Ultimate Reality, we will see ourselves as a "poor little me", victimized by life, unaware that life itself is created by us.

These were heady concepts for me as a young man, causing me endless hours of consideration and wonder. And that continues to this day.

Watts also frequently delved into non-duality, observing how death implies life, and how dark implies light. Colloquially, we separate these concepts, when in fact, one could not exist without the other. The ultimate reality is that it is impossible not to be. Existence is all that there is, and non-existence, by definition, doesn't exist.

As I sauntered on in my quest for life's meaning, these ideas acted as guideposts for me, where further spiritual inquiries frequently led back to them. Now, more than ever.

These days, we are seeing the Science of Spirituality become the Spirituality of Science. With the advent of Quantum Physics, the door was flung open and the soft underbelly of Creation itself was revealed in all its bizarre strangeness.

Such properties of the universe as Quantum Non-Locality have catapulted human understanding centuries ahead of where it was before. Now a proven scientific fact, we now see the universe as a infinitely vast sea of points of consciousness. And within each point, all other points exist--a holographic matrix of infinite connectivity, where it is now possible to travel instantaneously to any other point in the universe--a native property of consciousness.

As the process of Disclosure is extensively revealing, based on the testimony of quantum physicists working on formerly super-secret technologies, we're finding out that not only is the universe chock full of intelligent life, but that travel among the stars is commonplace, via the holographic matrix of consciousness. There are technologies at present that have demonstrated this capability allowing humanity to reach out to the vast numbers of advanced civilizations existing throughout Creation.

Further disclosures have revealed the extreme extent of the secrecy surrounding these "deep black" compartmentalized projects sequestered within multiple layers of the military industrial complex, and how this secrecy has been ongoing since the 1940s.

Although we've all been taught that our imagination is just "pretend", researchers in the field of remote viewing have shown the imagination to be more of a transport vehicle that transports our consciousness to whenever and wherever we direct it, so by "imagining" a reality, it literally takes us there where it actually exists--whether it be on the planet, or other places anywhere in the universe and beyond. 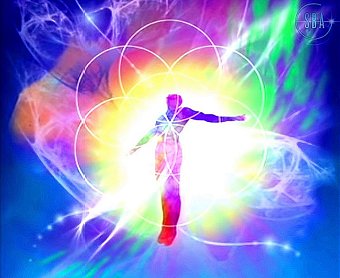 Humanity is entering a new epoch of consciousness representing a quantum leap in evolution. As science is finding out, our solar system is entering an area of the galaxy of much higher energetic waves and particles requiring each of us to vibrate at a higher rate than ever before. These raised frequencies are how we are emerging from millennia of darkness into the implied promise of galactic and universal light. It is where our true heritage lies, and where we have truly existed all along--it was just our belief in the darkness and limitations of an enslaved world that had us fooled.

Now we can see that the extreme depth of darkness only meant there was extreme light on the other side; and that the dark deceptions, despicable secrets, and occult manipulations were only given dispensation because of a greater field of Light. The darkness was merely a temporary eclipse of the ultimate and infinite Light of Creation. We now have only to choose to ride out of the dark shadows in our imaginal ships of light into a new life, a new civilization, a new existence of total freedom, immortality and bliss.

Will you choose that with me?