This Quantum LIfe #93 - Being Is Enough 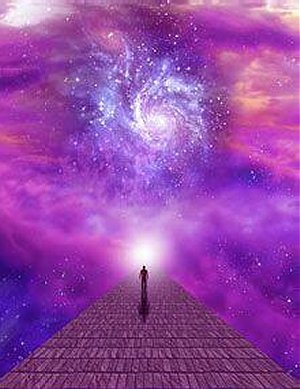 One daunting feature of the trek to Higher Consciousness, is that many times it feels like tumbling uncontrollably down a rabbit hole. And like Alice, all that can be done is to accept and allow for all the strangeness, as life becomes a seemingly infinite hall of mirrors reflecting over and over deepest fears and the strongest arguments against our empowerment.

In her talk in the Science and Non-Duality Series, Miranda MacPherson speaks poignantly about the stripping away of all convention in a spiritual practice, where the practice becomes having no practice. But to get there, there is a reckoning between who and what we believe we are and what is actually there--very disturbing because one realizes that all definitions of self have been mere habitual and unconscious constructs.

Of course, we are trained to do this via the socialization process, and so when the reckoning arrives there is a path to self-forgiveness (although at the time, it is difficult to accept). This in fact, is the core value of forgiveness--not so much about some wrongdoing, but much more about an act of unconsciousness, represented by the adoption of an identity, a requirement of socialization.

In the Hawaiian shamanistic practice of Ho'oponono, the practitioner uses a four-step process to break out of unconscious definitions that hold in place physical, emotional and spiritual dis-ease. There is dis-ease because the adoption of a socialized identity has required we shut off certain expressions of ourselves, which equates to shutting off of healthy gene expressions.

The four-step process of Ho'oponono is 1. I'm sorry; 2. Please forgive me; 3. Thank you; and 4. I love you. This is done as a radical act of forgiveness and unconditional love, that peels away the lie of the identification with who a person believes they are, thus leading to a freeing up of energy flows creating healing.

MacPherson also reveals that this process of "rude awakening" left her questioning whether she had anything at all to offer, and the realization and awareness that the trek to perceived higher consciousness has nothing to do with what you do about it, and everything to do with being.

Being is enough. This radical notion flies directly in the face of identity socialization, as it frees us from all definitions and expectations of self, opening the door to the experience of infinite possibilities and personal power.

In the core practices of Access Consciousness, there is a process of asking, "What else is possible?" when life seems stuck. The process de-constructs fixed beliefs in limitations that we use to define ourselves. Because we believe we are a certain "way", then only a narrow band of experience is available to us. We "tamp down" expectations and our personal power, all for the sake of protecting the belief construct of our identity.

By asking "What else is possible?" we call out the basic native quantum state of infinite possibility, where every state is possible, and the basic nature of the state is infinite. This infiniteness of possibility is inherent because we have infinite potential as creative points of being. We contain the potential to be a super-hero or a rock, it's basically a matter of simple choice. The archetype of the Shape Shifter embodies this potential for infinite diversity of expression.

As we continue tumbling down the seemingly infinite rabbit hole, we transcend "becoming", allowing the identifications with cherished identities to fall away. It becomes more about remembering and realizing our pure, unadulterated being, rather than becoming something, as that is a definition, limiting our experience.

Pure being is love, and as love we create infinite possibilities--creation without end.