This Quantum Life #92 - Oneness and Separation 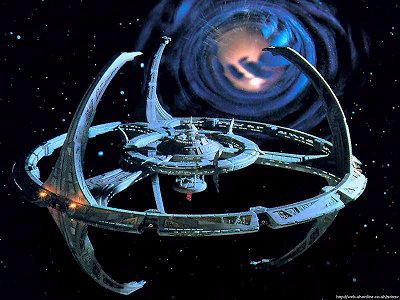 I've been binge watching "Star Trek" for the past few weeks--completed "Next Generation", and then dove into "Deep Space Nine". The first two-hour episode of DS9 tells the story of how the iconic "wormhole" near the space station came into being, and how Commander Sisko was able to convince the creators of the wormhole to allow ships through the 90,000 light year-long passage to and from the Gamma Quadrant.

The wormhole beings captured Sisko as he first entered the passage and transported him through various points in his lifetime, as he explained to them how humans perceive linear time. The beings did not understand the concept of "past" and "future", so Sisko did his best to explain that humans use time to experience sequences of events that become meaningful to them. The wormhole beings pointed out that Sisko was actually also existing in a past trauma, and so he was "not linear". As they continued to make their point, Sisko finally saw how they saw him, and agreed that his life was "not linear". Based on this agreement and commonality, the wormhole beings granted Sisko and all beings access through the wormhole.

This great story illuminates how linear time is perhaps the greatest illusion of the human mind. Although we can all say that "Now" is happening at every moment, we also claim that there were previous moments that we "came from", and further moments that we are "going to", and this is how we "live".

Closer to the reality is that our attention moves from one area of our chosen timeline to another. We use our powers of choice to move our attention from one time flow to another, and have rules about how events transpire so that the timeline-moving we're doing makes some sense to ourselves and others.

The cosmic reality is that there is no "past" or "future", only an infinite sphere of now that we are moving around in. A crisis of sorts can get created when we start to see our timeline as happening "to us" instead of as a result of us. And this crisis is the Crisis of Separation.

Separation is a big feature of 3rd Dimensional living. We start out in the oneness of our mother's womb, but are expelled from that oneness, and then our umbilical cord is cut, leaving us alone and helpless. We are then labeled with a name that further demonstrates to us that we are not connected to our origins anymore. We are further socialized from a paradigm of societal individualism with rules of conduct that prevent us from unduly inflicting ourselves on others, as if we are wild loose cannons of destruction, a further condemnation of our value and individuality. The most overlooked fact by humanity is that we have all had basically the same experience of enforced separation, and that bonds us in a most intimate way.

Research into such abilities as remote viewing and telepathy, has found that these abilities are built in to all of us, and represent a basic truth that we are all, literally, connected in consciousness.

Not only that, but advanced quantum physics research has postulated that every point in the universe is a "sentient node", capable of consciousness and holographically connected to every other point in the universe. This property of nodal consciousness is being researched as a mode of space travel, where it would be possible to traverse the distance between two points instantly irrespective of their locations. In Star Trek parlance, we'd be transporting through "sub space".

We become convinced that we are separate entities because we must have done something wrong--the classic "fallen angel" syndrome, where for an apparently arbitrary reason, we are no longer a part of the Creator. We became separated from it, and then jumped to the deeply erroneous conclusion that we are separate now from all creation somehow, condemned to a lonely existence of continually justifying ourselves and struggling to re-connect. 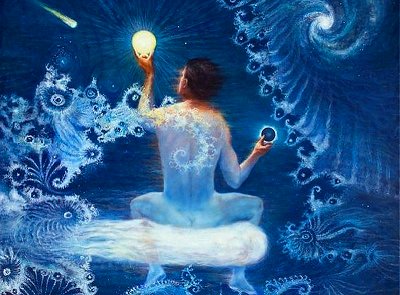 The cosmic elephant in the room is that love is the "secret sauce" of connection to all points and aggregations of points. Beyond just a feeling, love is the "dark matter", the plasma of space itself, from which we choose our experiences. It is inseparable from us because that point of consciousness we are experiencing as being, is a node of love. It is what we create our lives with, and is the stuff that vibrates and resonates as our thoughts and feelings.

Rather than the illusion of linearity of time, we are experiencing multi-dimensional holographic fractals of who we have chosen to be. We construct our being from a vast library of archetypes, chosen millions of times over throughout the infinite reaches of time and space. We habitually search The Other for who we are, when all along we are our own archetype.

By choosing ourselves, we return to love, our true, most basic nature. And by embracing and choosing to become that basic property, we inhabit and become the Universe.