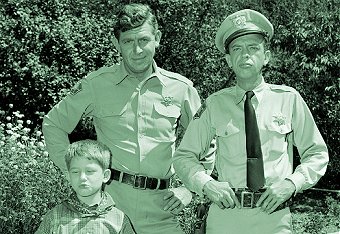 "All policemen in training should be required to watch the entire series of 'Andy of Mayberry'," declared my younger brother out of the blue today during one of our marathon talking sessions. I've come to appreciate these talks because he's, first of all, a kook like me, and second of all we both increasingly have come to see human life as a spectator sport.

"Andy always handled things. He was the last word, and people loved him for it. His good nature and down-home philosophy fit in with a type socio-emotional small town Utopia," he said.

I joined in, "Yeah, he always was kind of pre-crime--always right there when potential trouble could have started, so nothing ever got out of hand that couldn't be fixed with good ol' common sense and a handshake."

"Uh huh... I love that style of TV way back in the day, when the Beaver had to apologize to his dad, and Fred McMurry was the wisest dad in the world," my brother waxed nostalgic.

I then pointed out that those TV shows were more about feeling snug and cozy in a predictably small world with predictably smaller world views. And as the 60s "family show" began to go out of fashion, it seemed like it was more because script writers wanted to be more dramatic and show how things "really are"--maybe a product of pressure from TV execs to increase ratings: we all know what suckers we are for drrraaammmaaa. Or, there were darker agendas at work.

The rise of the police procedural drama really illustrates this point. Shows like "The FBI", "Hawaii 5-0", "The Untouchables", "Police Story", and "Kojak" all snagged the lion's share of ratings back then--and shows like these continue to do so today. But at a deeper level, the police procedural is all about separating the good from the bad, and bringing "justice" to crime victims by discovering the "truth" behind a particular crime. Audiences love that stuff, because it's a no-brainer. There are the bad guys doing bad things over there, and here come our good guys to make them pay--the dramatization of polarity.

It proves to us that the world is basically black and white, good vs. evil, a place where crime doesn't pay, and if it does, it's only for a little while--and the longer it does pay, the harder the fall. This is comforting psychology to take refuge in, as life became more and more complex and the grey areas continued to expand into the 21st Century.

Mass entertainment media like this has, in my view, too much power and influence over casual consumers. TV is already one of the greatest of hypnotic medias, with its rhythmic scanning of electrons across a framed screen with the viewers' attention focussed on a small area. It's actually outright hypnotism. And now these days, with tiny digital dots in dense arrays, it's the very essence of high definition mind control.

And if you were wanting power over a society, well, TV is THE way to go. Throw in subliminal messages and images, and you've got a recipe for creating a hoard of unthinking, unreflecting zombies with emotional "on" switches and little self-control. You've created a polarized society, which is exactly what any power monger wants to see, because a divided, polarized world is easy to control, and easy to profit from. 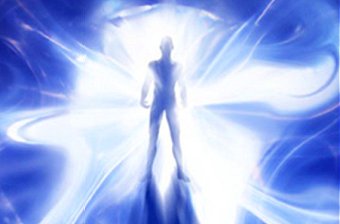 The point I'm laboring to make is that the more we become aware of the darkness, the more important it is to embrace the light. Embracing the light is not the arduous task the perpetrators of the dark side would have you believe, because we ARE ALREADY LIGHT. Consciousness IS light. So it's just a matter of being what you ARE, as you face what you are not. Yes, we all have that popular "dark side", and we've stored a lot of power in there in the form of unconscious energies we've purposely created or agreed to. But that doesn't mean we have to automatically be victimized by our own dark choices.

Just observe it all--get into spectator mode about your own mind and attention and where you control it, and where you allow it to be controlled. Get into the non-duality of mindful awareness. There is no "good" or "bad"--just different states of energy. For all his simplicity and good intentions, I believe Andy of Mayberry really knew this to be true. And, yes, all police training should definitely require a nice, long visit to Mayberry.