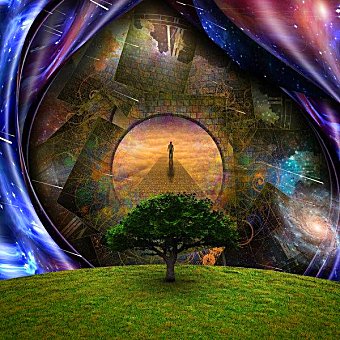 I woke up suddenly the other night--it might have been the thunder of a Kansas spring, or a nearby train whistle in this railroad town--with a distinct voice in my head. Actually, a loud voice in my head: "There is no 'out there'!", it seemed to rant, then a short pause, and, "External, internal--it's all eternal."

I turned over in bed onto my back, staring at the ceiling slowly being illuminated by the early morning light, with a faint patter of raindrops, and comforting far-off thunder. I found myself reflecting back on a conversation I had with my younger brother, where we had both concluded that we had "not signed up for this"--meaning human physical life. He was bemoaning making certain choices that he felt powerless to change, and I was offering up what seemed like lame platitudes about the perfection of the moment and the "master class" of three-dimensional living. We both realized we were referring to opposite ends of the same spectrum.

The loud voice continued: "You are the eternal. You are life." At this point, I really wanted to fully wake up and track where this commentary was coming from. So as I looked around, I realized I had said these things to someone, and now they were echoing back to me.

I've been going through some uncomfortable shifting physically. I wouldn't go so far to say it was a healing "crisis", but it is a healing, and it has been painful. I was on a "Zoom" conference call last night with three shamans, and had related this bit to them, and one of them said, "You are releasing your unconscious into the eternal, and your body is resisting it." They all nodded, and I remembered that loud voice. What if what we call "healing" is more a matter of bringing what is internal and external into the Eternal?

The most basic of bottom lines is that we are all eternal consciousness that has simply agreed to muck about in this thick earthbound density for a period of time, and after we're done "mucking around", we release whatever grasp we have on physicality, and retreat once again into the Universal Field of Consciousness.

When you're a rebellious renegade like me, after 60-some years of pain, suffering, and observing the transitory nature of it all, it ends up seeming like a joke. But I'm coming around to the Truth of it: I'm here to make the internal and external eternal. I'm here to live my life to reflect back to me the eternal, infinite nature of what and who I am. And if I can do it HERE--of all places--then I've really DONE something for the Universe at large. I've contributed to a morphogenetic field that bridges the duality of life and death. A field that says I am love, and that I am always here, and I have never been anything other than that, and never will be anything other than that.

So what "healing" really means is to heal the lie of death that would have us believe we are not eternal, victimized by the false construct of "in here" vs. "out there"--the death we create by not believing that love is all there is, and not understanding that creation and destruction are the same thing.

Hence, by claiming that "I didn't sign up for this," it is a direct denial of the eternal love that could potentially transform the Universe. Rather jaded of me, don't you think?

Let's transform all the little, petty complaints--deaths, really--into grand commitments to and expressions of the infinite and eternal love we all truly, and most basically, are.