This Quantum Life #68 - Jumping Through the Glitch 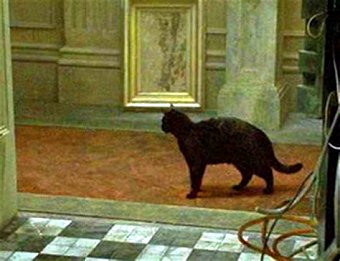 I had something happen the other day that massively shifted my world. Recall in the "Matrix" movie when Neo notices a black cat strolling across a doorway--twice. Morpheus told him it was a "glitch in the Matrix", and was a sign that the program was being overwritten with new data, and in the movie was a sign the pursuing Agents were onto them.

Since then, this "glitch in the Matrix" idea has gotten incorporated into the cultural psyche in interesting ways. DJs use the "glitch" to describe an obvious "error" in the flow of the music that is turned into a part of the musical work, or mix. I've also heard people say, when they encounter a synchronicity or some unexpected weirdness, "Hey, there's was a glitch!"

I bring this up as a way for me to describe (or understand) the massive shift I experienced. I was in the midst of a deep session with my shaman friend. I had been feeling stuck and powerless--pretty common these days--and she out of the blue said, "Well, you could always move to Bisbee, Arizona. I heard rents there are the lowest in the U.S."

I laughed at the absurdity of the idea, but then in a flash of inspiration--a thinking glitch, really--I thought, hey, why not move back to the town in Kansas where I incarnated? I immediately put the thought on the WTF shelf in my mind, and didn't mention it to the shaman.

As I began to wake up the next morning, and in a Theta state right before opening my physical eyes, and saw a 30-something man standing at the foot of my bed with a quizzical or concerned look on his face. I thought my eyes were open, but when I did open them, I realized it had been a visitation by a guide.

My next thought was, "Wellington"--the town in Kansas where I was born. My mind suddenly began processing everything I knew about my birthplace (not much), and right then I realized I'd NEVER considered living there, and that the idea was so off my usual track of thought and action as to be absurd. But as I did a slow jump through this "glitch" in what I had constructed as my set of possible life options, it became crystal clear that this option was beyond any "normal" expectation, and thus worthy of consideration.

There is a fascinating video on YouTube by Tom Montalk, who describes various types of synchronicities. There are the garden variety "coincidences", and then there are the more rare "manifestation" synchronicities where, as a direct result of creating a choice, things immediately begin to line up for the actualization of it. Montalk also talks about how synchronicities are a signal of entering a quantum space where events and circumstances are particularly subject to manipulation by the mind. The "weirder" events are, the less past momentum they have, so that by jumping into the weirdness, your causation is amplified, since there were much fewer points of creation for the flow of events.

Because I have never considered re-locating to the place of my birth, by choosing that option definitively, without reservation, the quantum energies are much more available for the manifestation of it. Montalk suggests we all follow the energies, symbolism and metaphors that make up synchronicities, as they can lead us to greater, more fantastic and fulfilling versions of our lifestream. In other words, when there is a glitch, jump!

So, at this point, I'm on my way to Wellington! Although the resources to make this glitchy move have yet to show themselves, I somehow KNOW they are there, and my arrival in the Land of Oz is assured.