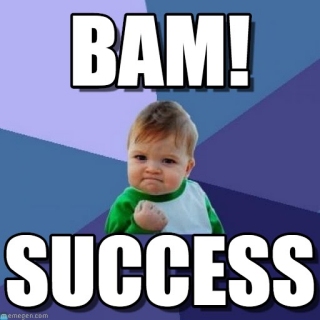 Since embracing the "quantum" way of life, many things have changed for me. I notice I have really different "pet peeves"--behaviors of self or others that stimulate an automatic reaction because of a pre-conceived judgment or point of view.

We call them "pets" because we have no intention of letting them go, mainly because, I'm pretty sure in my case, anyway, letting the Pet Peeves run rampant gives a certain "rush" of control; an outburst of a point of view; the heart-felt judgment or justification of who you are. I think we embrace certain Pet Peeves in order to make it seem we're participating in life and expressing ourselves about what we need and desire, much like we do with our pets.

One of the newer Pets I've been letting run amok, is rebelling against memes about process. Here are a few (actually seen on Facebook) that usually put me in a state of rebellion:

Everyone, it seems, has their own formula for success. And most people would probably nod their heads as to the truth of these statements. The problem is, each one of them, under certain circumstances and possibilities, are absolutely false.

For example, I've worked hard and lost money. I've also made a lot of money without doing hardly anything.

A year from now I'm not going to be mulling over my choices I'm making now. I'll be making new choices without any regrets.

Consistency is also the way to mediocrity, stuckness and non-mindfulness.

We all know examples where "hard work, determination and sacrifice" has not led to success.

Conventional wisdom without introspection allows one to embrace these memes, not because they are really true, but because they sound like they should be.

All of the memes above are about process--the way you do things; the right way to do things. From the quantum perspective, however, they are one way of doing the process.

What gets me up on my soapbox about thinking in this unexamined way, is that it completely deletes out possibilities. There are a million ways conditions, things and experiences manifest in the world. Why narrow it down to one measly meme?

By applying infinite quantum states to the things you want and the life you desire, it is the certainty that asking the question puts the universe into motion is key. Sure you'll have stuff to do when you start asking about a better job, a bigger house, nicer car, or an epic relationship, but without living in the question of those things, it can only be hard work and sacrifice--that one way you are convinced is the only way.

The universe always has your back. There's even a word for it: "pronoia", which I've written about in past issues. The universe has your back only when you embody the question. It's then that the universe gets busy bringing you what you want in the way that is best for you.

Questions such as, "What would it take for the best house to show up for me that would bring joy and ease?"; "What energy do I need to be to receive an epically healing and generative relationship?"; or, "What is it going to take to bring about a big change in my life toward joy and fulfillment?" Then, you remain in that question as the Universe goes about answering it.

I'm not saying there won't be hard work. I am saying "hard work" is one possibility. If there are infinite ways something appears in this universe, then there are certainly other ways than "hard work" for it to show up. Maybe it's joyous work. Maybe it's play that doesn't feel like work at all. Maybe it's just answering the phone. Or, maybe it's enthusiastic involvement.

My point is to be mindful about how you've decided to make things happen. Look at what processes you believe must be in place before something happens for you. Then, realize that is only one way of looking at it. If you must have a process, or a checklist of things to do to get what you want, then ask the universe for options--the most fun ones. But always remain in the question, and the quantum Universe will deliver.