This Quantum Life #177 - Pain Is Love With Nowhere To Go 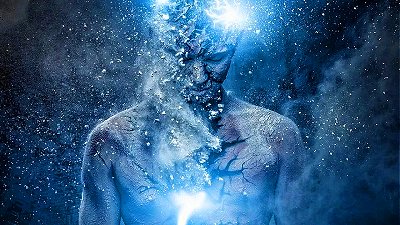 When I was about 15 years old, during one of my trips to the local library in small town Iowa, I spied a large format book on yoga. Every page had a big picture of a yoga pose on it with descriptions of medical benefits, history, breathing tips, and movement sequences. I was fascinated and checked out the book. I spent the next two weeks trying some of the asanas in my room at home, and diving into the philosophy and discipline of this ancient form of spirituality.

The author described the meaning of yoga as "Union with the Divine", declaring that the serious practitioner, with commitment and proper discipline, could attain high spiritual states and at some point achieve enlightenment. These were brand new concepts to me, yet seemed oddly familiar.

It wasn't until the age of 50 that I actually began a formal yoga training, diving headlong into Bikram Yoga (otherwise known as "hot yoga") for eight years as a final "hail Mary" to resolve chronic lower back pain from disc degeneration. It took about a year of daily practice, but it worked to permanently fix my back. I continued with the practice and achieved other benefits that have served me well.

One aspect of doing the asanas was how to respond to pain during the movements. The poses are designed to find blocked or constricted energy pathways in the body, and boy, did I have a lot of those! The instructors emphasized and reminded the class frequently that the way through the pain was the breath. Breathe through the pain to release it from the body. Although this was a useful and necessary teaching, it wasn't until years after my discipleship that I came to realize that the breath was only half the equation of pain resolution.

The definition of yoga is "union with God", and that union is achieved through mindfulness, focus and an offering of the sensations, discomforts and pains to Source/God/Creator. This energetic "yolk" provides a pathway for these "undivine" experiences to find their purpose and role in the Universal Oneness. Once given as an offering to Source, the separation that pain represents is removed in the light of the new creations made possible by that offering--a recycling of sorts by the Creator to serve in the infinite expansion of Creation.

Pain "hurts" because the body reacts this way to energy that has no direction or purpose. Once this energy is given direction and purpose, it finds its home in the fabric of Oneness that is Universal Creation.

For most of us, the first reaction to pain is usually to "get rid of it", and the sooner the better, but this mindless knee-jerk reaction only serves to further isolate the energies trying so hard to find their place in Universal Oneness.

As quantum living has shown us, everything is energy, and that energy is Love--the creative power manifested by Source/Creator/God. Love is the purpose of all action. Destruction, suffering, pain and darkness are simply states of love precipitating a new creation. Human attachments and judgments make up the illusion of pain and destruction when we are unwilling or unable to understand the bigger picture of love at work on a greater more glorious creation.

Disease, aging and death in the human body could be seen as a build up of energies with no expression, banging around our DNA and regulatory systems like a bull in a china shop, keeping the body in defense mode, unable to keep up with repair and restoration of the damage. The resulting pains and discomforts should have us mindfully embracing these random, lost energies and making a love offering of them to Source/God/Creator.

As we have all experienced recently, the "wake up call" by Team Dark has served the love creation of humanity awakening from its hypnotized slumber of normalcy to answer the clarion call of a new creation. As darkness falls away and the light dawns within us, we are inspired to make love offerings from our heart to repair and restore Mother Earth to her former glory as the grand, conscious, loving matriarch of love in action among all forms of life.

The pain and suffering we have all endured spurs us on to act out of love and compassion for our fellows, giving meaning and place to the pain in the creation of that Kingdom of Heaven we've held for so long in our hearts. It is now released, active and expanding, bringing peace and prosperity to all nations forever.