This Quantum Life #174 - Allowing What Is Gentle 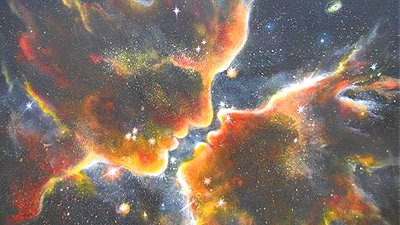 From the I Ching Book of Changes, Wilhelm (1950): The Gentle: Success through what is small. Penetration produces gradual and inconspicuous effects. It should be effected not by an act of violation but by influence that never lapses. Results of this kind are less striking to the eye than those won by surprise attack, but they are more enduring and more complete.

The first coin toss I did for an I Ching divination was "The Gentle"--something around 30 years ago. It foreshadowed my continuing fascination with this ancient technology born out of a gentle curiosity that persists and penetrates my life today. It became that "influence that never lapses" bringing about subtle effects of deep understandings that over time, changed my life--exactly like the effects of weather on a rock face, or the constant, inexorable ocean tides breaking down solid rock into sand.

We get fooled sometimes into thinking the only way to bring about changes in our world is to do something big, loud, and full of significance, when in fact, changes in the human world, as well as in Nature, happen gradually and consistently to allow for everything changing to find its place. The big, noisy crashing of cataclysmic change is by far the exception, and mostly serves to break everything down into their elements so that the gentle, moment-by-moment small natural forces can do their work of calmly and smoothly harmonizing and organizing the destruction.

Of course, from a universal perspective, a star could explode, wiping out an entire solar system and its inhabitants, and it would be a minuscule effect in the grand scheme of things. And this is at the nexus of understanding change itself as the active principle of universal awakening.

When we gradually--or suddenly--awaken to a truth previously hidden from us, it seems catastrophic as it shifts our assumptions about the world and our perception of it. Or, the gradual dawning of an awareness connects our consciousness to a wider, more inclusive perspective that imbues life with new meaning and substance. And yet these awakenings come about by a myriad of quiet whispers repeatedly and constantly nudging us to new awareness--where a big, screaming revelation of truth merely puts us on the defensive, tensing up our resistance, and closing down our allowance of alternative possibilities.

It is only after some time of quiet reflection and gentle allowance of a traumatic event or revelation that we timidly pull down our resistance, and begin to fit ourselves into this new way of experiencing the world. It is the incremental widening of perspective that allows the internalization of new perspectives, and the subsequent gradual rearrangement of our world view.

My yoga teacher was constantly admonishing me to aim for the small changes, and take the win--a millimeter more flexibility, a micrometer of ease of breath, or the fraction of an inch better posture. These are the lasting changes because they avoid the spasm of resistance inherent in forcing movement, or shooting for a prematurely advanced goal. I had started out going all out on my asanas replete with groans, gasps and grimaces under the mistaken assumption that force was the only way to get my body to do these outrageous things. I did finally calm down into a silent yoga practice, applying just enough effort to make that small change just under that resistance spasm to the violent intent of forcing an asana.

Part of my own awakening was coming to the awareness that humans on this planet have been subjected to all manner of control strategies and mechanisms to force us to do the bidding of power-mongering control freaks. We have been bred, trained and coerced to be slaves to the ruling class. This set up blockages upon barriers upon ridges of resistances cemented in place by fear and destroyed self-esteem.

We have convoluted and ridiculous justifications for our disempowerments and weird untenable ideas about personal power, when all the while underneath it all, we are infinitely powerful, immortal and all-knowing spiritual beings. But all that innate Creator-endowed power was weaponized against us in a millenia-long campaign of reward and punishment culminating in our exquisite self-destruction, allowing the Controllers to recycle, reuse, and reprogram us to their despicable ends.

The good news is that benevolent universal interests have waded into the master-slave morass and have quietly and gently removed the "unrepairable" controllers, leaving us former slaves to reconnect with our power, reestablish our portal to our Creator, and grant ourselves permission to be who and what we truly are--that infinite being of cosmic love and compassion that heals and restores all things wrecked by the inverted matrix of control.

We can now be ourselves again, free from the debilitating fears of failure and fate, who can blossom into full-spectrum humans, unencumbered by depression, disease and death. It is only our leftover shell of habitual programs running automatically in the background of our psyches that limits us now. There is nothing left to reenforce these self-destructions held in place only by our procrastinations to waking up.

It is now possible to gently remove the shackles, quietly observe what we have allowed to disempower us, and gradually admit to our puny rewards of compliance, that have delayed our total freedom. Little by little we can unfold our wings, gingerly reach out to help our fellows do the same, and gently organize ourselves into an unstoppable army of angels of restoration. Together we can reimagine our fair planet to be the delicious and miraculous heavenly realm it is destined to be.