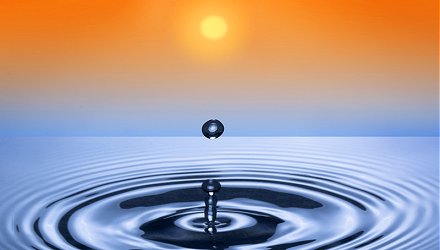 I have one of those gravity water filters with the permeable "candles" that strain out most of the tap water impurities. I sat gazing at this simple contraption, watching the drip, drip, drip of purified water drop into the two-gallon clear glass urn with a petcock that would release the clean water for whatever use.

The drips were making the journey through the filter at about two per second, so it would take a couple of hours to fill the urn. As I observed this, I imagined that a million of these filters linked together would create a gush of water, and revealed to me how most global change is accomplished--all the way from human social mores, to the rise of mountains.

For the most part, Nature takes her time--relaxing into her eternity with complete certainty of outcome, to create new forms, new processes, and new relationships piece by piece and drop by drop. As human animals living among these forms, processes and relationships, we tend to "skip over" the processes that take up too much time. Our relatively short lifespans have us scurrying around like hungry squirrels obsessed with gathering enough nuts and seeds to keep us from worrying about starvation, with little time for reflection and appreciation of the giant meta-forces gradually transforming the world around us.

There is a superpower we humans have, shared by bees, ants and other hive denizens, and that is the communication of accountability. When we choose to engage this superpower, small, individual efforts are exponentially amplified to create planet class changes in the world.

When we gather together, agree on an outcome, stay on-task and help our fellows do the same, change is inevitable on the largest of scales. And this can be done with the merest expense of time and effort, or, can be, for the emotionally invested, a full-time endeavor. However, the all-encompassing commitment of the few is not necessary to accomplish the desired end result, but more important is the accountability to do at least a little by the majority.

I participated in a community garden as a young man, and every spring about 50 of us would gather at the garden plots to plant the year's food. I had about a 50 square-foot plot and about 10 tomato plants to transplant. It took me about an hour to cultivate the ground, plant the tomatoes, and mulch, and I was done. I looked out over the entire garden area, and with satisfaction saw what can be accomplished with so little action in such a short time by so many people.

In meditation experiments done by Maharishi University out of Fairfield, Iowa (my old hometown), it was shown that a few hundred meditators meditating on peace and harmony for one hour significantly reduced the crime rate in the town almost immediately.

In these days, as the global controllers lose their grip on humanity, they would have us believe that they are still in control, and that resistance is futile. This, of course, is the exact opposite of the truth. And yet their mass media minions continue spouting these lies 24-7, hoping to demoralize us and break down the fabric of society. What they are most afraid of is a mass awakening and a regaining of situational awareness in their former slaves.

Waking up to individual personal power means a return of courage and sovereignty--two of the most dreaded aspects facing any controller. Awakened with this new found perspective, the word spreads and people start sharing their stories, embrace their commonality, start organizing, and before long a movement is born.

There is a logarithmic progression of power--where ten people working together is 100 times greater than two. This is the efficiency of Nature, as observed in the Biblical saying, "Where two or more are gathered, there I will be also." It is the synergy of combined intent that attracts the energy and elements at a greater velocity than one individual could acting alone. God loves creation, and rewards those doing it together.

The act of coming together in agreement to achieve an outcome is how rebellions and revolutions get traction. The tiny cadre of Controllers believe that since they own everything, all they have to do is make everybody afraid, and pay out huge sums of money to their "soldiers" in order to maintain world domination. And for a short time, this does seem to work--until that dehumanizing cynicism finally crosses a moral line with enough of the slaves, and like-minded neighborhood groups begin to combine with county, state and national groups, and in short order the Controllers realize that all the money and resources in the world are ineffective in corralling and putting the slaves back to sleep.

That ability we all have to connect with each other is the ultimate target of any controller. You know, "Keep them six feet apart and afraid of socializing" and we'll keep control, they say. That might work for a minute, but humans are hard-wired for social interaction, and no amount of mandating or even torture can change that. It is only a matter of time before connection is restored, and a decision is made and agreed upon to change the situation, and communities begin to organize. And it is at this point, no matter how hard they try, the Controllers lose control. In fact, the harder they try to control, the more people are shaken awake.

A beautiful, creative, harmonious world vision has been agreed to by millions of connected human beings, organizing and sharing in this vision. It is, therefore, inevitable.