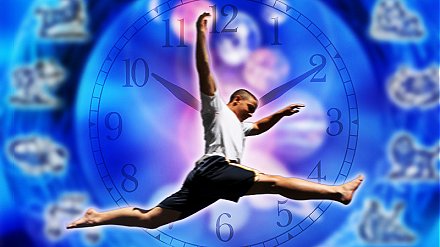 I have this recurring dream every so often where a means to an end gets disassembled piece by piece the harder I try to get to the goal. Since I've been a drummer for many years, this dream would take the form of being in front of a large audience and just as I'm about to perform, the drumsticks would turn into pencils, and shortly the drums would turn into kitchen pans, and soon I'd be playing small jars with my hands as the audience is leaving shaking their heads.

Another version of this dream, is setting out for a destination in my car, only to have it turn into a bicycle going up a steep hill, and then the wheels are falling off, and then I'm pushing myself along on a old skateboard with time running out.

With most of these dreams, I wake up when I finally give up in the dream--and I think that's a perfect metaphor for the life experience: we wake up when we give up. It's not so much about stopping work on the goal, as it is stopping the effort toward the goal, and just giving it up to the intelligence and power of the Universe.

What causes the giving up in the dream is having every means to an end taken away, until I see no actual way to get to the goal. The harder I try, the more things break down, until at last, I'm left with anxiety and frustration as satisfaction flies off without me.

This metaphor has everything to do with 1) shifting attention from completion of a task to what's blocking its fruition; and, 2) prioritizing physical action over changing how I'm being.

Because this is a sometimes confounding mirror universe, the effort we put out toward something simply gives us more ways to expend effort. We try harder, and get mirrored back trying harder, and things eventually get overwhelming as hope fades. We get hung up in the doing of the thing because we assume what is happening is a result of our personal actions, but that's an ego construct. What's actually happening is that the universe is telling us the effort is unnecessary. This is because we already had created the end result by beginning the journey, and further force of intent only creates resistance because we started seeing only barriers.

More basically, we created from our desires, and those desires emanated from how we are being. Because we've been brainwashed into believing that our imagination is separate from what's happening to us, we see life as coming at us with all sorts of tasks to do before anything changes. This is deeply ingrained master-slave programming. Our ability to change how we are being with our imagination, gets hijacked by believing the illusion of appearances not matching what we want. We forget all about changing how we are being in favor of task-centered actions. We even get a burst of dopamine pleasure when we complete a task--whether it does or doesn't have anything to do with our original visualized goal.

This, again, is slave genetics, fully exploitable by the Controllers gleefully commanding their minions who are hypnotized by piles upon piles of tasks to be carried out in the name of safety and normalcy.

This brings up the central property of being: frequency. The first premise of quantum living is that everything is energy. Energy vibrates at various frequencies and that determines our experience. We are being in a frequency and that is what is causing our reality to form around us. Each frequency is an already formed universe containing all timelines, people, physical objects and actions germane to that frequency.

As Bashar has eloquently pointed out, we are changing frequency billions of times a second, meaning that we are "jumping timelines" to have our experience. We use our mind to create a seamless illusion of an arrow of time with a "then", a "now" and a "will be". This ignores the cosmic fact that every now moment we are choosing our frequency, which creates the illusion of change. When we get micro-focused in on our personal actions creating a result, the more convincing is the illusion. We reach for a glass of water, for example, and at each micro-moment of perception, we have modified our frequency to match the universe where there is that perception: "Here is the universe where I'm reaching for a glass of water", and now, "Here is the universe where I take a drink", etc., etc.

One technique to change how we are being, and thus our frequency, is re-framing. This is a perceptual skill, where something that may have been negative becomes positive: "I spilled paint on my new floor (frown)", re-frames to "Ah, here's an opportunity to lay down tarps so I can have more fun painting." Choosing to stay in the higher frequency of an experience reveals even higher frequencies and thus timelines to jump to.

Being is the field within which we choose our frequency. By choosing the highest frequencies we can imagine, instantly transports us to the highest and best timelines, and from there even higher frequencies are available. This is the essence of quantum living.