This Quantum Life #138 - Freedom From Good vs. Evil 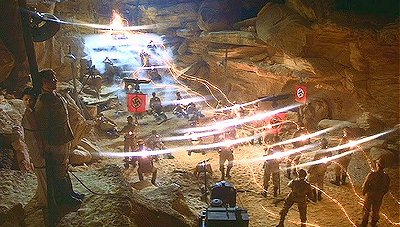 Back (way back) in my Bible study days, I was repeatedly fascinated by the concept of transmogrification. It is defined as a something completely changed from its original form, or definition. This has happened most obviously in politics, where one party has done a 180 with their beliefs, causing the other party to shift theirs. But speaking more metaphysically, what we're witnessing now is the transmogrification of evil darkness into angelic light.

Thought leader and author, Terence McKenna, describes a similar observation saying, "The Universe is getting it's act together. It's connecting the dots. It's bringing everything into co-relationship with everything else--becoming what mathematicians call 'co-tangent', and it gives the Universe a feeling of being imbued with a caring presence."

This bringing of everything into co-relationship with everything else is a process of shifting chaos into coherence--the transformation of evil into love. An early step in this "transmogrification of evil" is that the causation of chaotic and destructive energies that is normally hidden in the dark recesses of the souls of the perpetrators, is revealed in the glaring light of conscious awareness. There is what I call an "Oz moment", where Toto pulls aside the curtain to reveal the dark machinations of the perpetrator for all to see.

These revelations lead to more and more awareness as to how the chaos in the world is being created, exported and perpetuated. The "evil doers" are then confronted with a choice--either further retreat into dark subterfuge, or submit to the light within their own souls. And just as the "Great and Powerful Oz" transmogrified into the kindly benefactor, former "dark actors" will choose to help bring down their own cohorts and/or embark on a course of retribution for their crimes.

For millennia, humanity has been waging a war under the banner of "good vs. evil". This has been revealed as a misdirection by the Controllers, who profit by sponsoring both sides of a conflict. History is littered with such shenanigans, from the Ford Motor Company building both American and Nazi tanks in WWII, to the Rockefeller Foundation and other Big Pharma interests creating a disease, and then offering the cure to the terrified masses.

A population is divided up, and then ubiquitous patriotic propaganda is dumped on both sides to demonize the other. Sketchy politicians are blackmailed, mass media is purchased, so that the "bad guys" are over there, and we're the "good guys" over here, now let the wars begin!

Of course, the real battle is between the forces of dark and the forces of light. And yet, this, too, is a misnomer. What's actually going on is that the dark doesn't want to be revealed, and the light wants to reveal it. The dark resorts to all manner of trickery and deception to convince the light forces that there is "nothing to see here", and yet as more curtains are pulled aside it becomes harder and harder for the dark forces to maintain a grasp on their weakening narrative.

Meanwhile, humanity is spread across a wide spectrum of complicity, depending on how much sympathy there is for the devil. The sympathy arises from the various depths of the darkness in every soul. Within us all are those dark places we hide from ourselves, and other dark places we hide from others.  Subconscious behaviors make us vulnerable to controlling propaganda, and a failure to mindfully seek out and reveal our own darkness allows the Controllers access to yet another potential automaton of compliance.

These days, because the dark forces have so absurdly over-played their hand out of desperation as they scramble and scurry away from the light, the rest of humanity begins to understand their nefarious agendas, and depraved motivations, leading to greater and greater discernment within all of us, bringing that light of understanding to our own psychologies.

In other words, these extreme campaigns of the Dark are inadvertently awakening the unconsciously complicit to the light of love, compassion and justice. The Biblical proclamation of Christ, "Where two or more are gathered in my name, there I will be also," describes the logarithmic progression of light transforming darkness.

As this inevitable process of lighting up the darkness proceeds, the volume of cacophony increases as the dark forces scream in terror before the God Light of the Divine. This should give comfort to the newly "alighted" citizens of the New Earth that is materializing before our very eyes--an eternal world of beauty, love and justice, where the True Light within the hearts of beings everywhere is safe and secure in the Arms of Heaven.