This Quantum Life #127 - The Improbable Truth 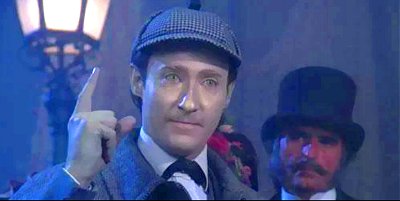 "Once you eliminate the impossible, whatever remains, no matter how improbable, must be the truth." -- Sherlock Holmes

I was watching Star Trek Discovery, and was amused when Spock declared that famous Sir Arthur Conan Doyle quote. And I believe the android character, Data of Star Trek Next Generation, did the same while playing Sherlock Holmes in a holodeck program. The challenge is that in the quest to "eliminate the impossible" there are often gaping rabbit holes of possibilities that can get your head spinning in short order.

Just as Morpheus said in The Matrix, "You take the Red Pill, and I show you how deep the rabbit hole goes. All I'm offering is the truth--nothing more." Neo takes the red pill, and the world is changed forever.

The "Truth", defined traditionally and colloquially as "what is actually going on", has evolved from a specialized study--reserved for academic researchers, or old-school journalists, to an avid past-time of a large swath of a population suffering from the cognitive dissonance of blatant propaganda vs. the facts.

The first thing we usually do in "eliminating the impossible" is to seek out information that has been hidden, because when the little-known, or behind-the-scenes facts are revealed, so are the motivations of those covering it all up. The first question to ask is, "Is this a lie?" And then proceed to de-construct the apparent situation with verifiable facts, direct observations, along with direct knowing and intuition--our "gut" feelings.

The truth has a major advantage over lies: It is surrounded and infused with light. Lies are shrouded in darkness and misdirection. So when truth is being cemented over by lies, at some point, the light breaks through the darkness, and the lights of justice, love and peace shine out like a beacon.

When Jack Nicholson's character in "A Few Good Men," exclaimed, "You can't handle the truth!"--you knew right then he was lying, as the first line of defense for the liar is to "protect" or "save" the innocent from information that would surely indict the liar. 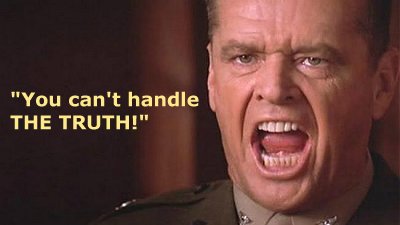 A forensic approach usually includes "following the money". Who benefits from covering up information, or misreporting to and misdirecting inquiries? "Nothing to see here", or "Pay no attention to the man behind the curtain!" are classic commands that actually point directly to where the truth is.

Although I could lay out all the examples of lies inundating current "news" outlets that were hijacked over the last several months by the vested interests of world-class liars, that's not what I'm getting at with this piece.

Instead, the quest for truth is best served by self-inquiry--a de-construction of the lies surrounding and obscuring who we are and how we are being. How much of what we assume to be true about what and who we are is a lie? The advantage in this sort of inquiry is that we can proceed from the knowledge that we are indestructible, immortal points of consciousness. Then, we can reveal the lies that tell us we are not that.

The very last thing the social controllers want is people believing (or knowing) that they are indestructible, immortal beings of light. And so the campaign begins to convince us of our vulnerability, powerlessness, and mortality. Now, this is inculcated into our social indoctrinations from birth, so the lies obscuring our true natures are stacked around us at every turn and cover us like a black goo when we glimpse a freedom here or a super-power there. The campaign inevitably begins in earnest to bring us down to a lowest common denominator of subservient victimhood.

The reality of the situation is that these lies of slavery are only given power and strength by our agreements. We cannot be controlled without first handing over control. Otherwise, the flimsiest of lies can rule our every action and command us to live lives of certain bondage. We are the operant power. Anything that contradicts that is The Lie.

We can recognize controlling liars from their rhetoric of "for your own good", or "for your protection and safety", or a narrative of how we are ignorant of "science" and the knowledge of experts we don't have clearance to access. Pure fiction. And if we buy it, they've got us. And we've just locked ourselves in a cage of compliance with a narrative of danger, weakness and victimhood. Easy to control.

Again, we do it to ourselves. And this puts us squarely in the realm of the real spiritual work. How are we limiting ourselves? How are we falling asleep in the face of tyranny? How are we darkening our own light?

The good news is that the more lies and limitations we reveal, the brighter and more joyful life becomes. We start to see existence as a Great Becoming--a return to greatness, a re-establishment of sovereignty, and an embrace of cosmic love for the process.

Yes, it may seem improbable that these states of being are attainable, but then, as Sherlock Holmes would point out, that would make it TRUE.