This Quantum Life #121 - Act From Inspiration 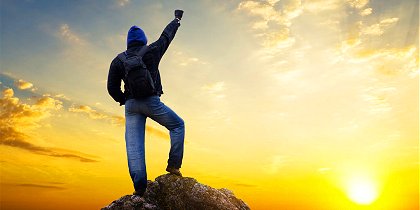 Growing up, my granddad on my dad's side was an Irish immigrant, the president of a small Mid-western university, with a Divinity Degree and PhD. in Education. He always seemed to make it a point to ask me about what I was thinking, and then usually had something clever to say about it, or he would point out a book in his library to lend me. He was fascinating to me because he let me see his mystical side--I've always said Granddad was a Christian Mystic. I usually assumed our little talks about leprechauns and angels were aimed at my childhood imagination, but even into my 20s, he would insist on his belief in the "Little People": "I've seen them. They do exist," he would declare with a completely straight face.

In my senior year of high school, I was having a particularly difficult time emotionally, struggling with frequent bouts of depression and angst about the world, and Granddad was a willing confidant. One day of more than usual existential angst, I asked him, "What is the main thing you've learned about life? What keeps you going all these years?"

He paused, smiled and said, "I never make any decisions when I'm afraid. And I try to do things only out of inspiration--not out of fear."

As I went on to embark on my adult life, those words would echo back to me when I ended up in a unwanted situation, or was feeling down--even for no apparent reason. Every time, I would realize that I had been doing my life--making decision--only to alleviate some fear. At one point, I was pretty sure I never knew what "inspiration" really meant. After all, aren't we all just trying to survive--just trying to keep from being homeless, from starving, or from getting sick?

At some point, I think maybe in my forties, I was sitting on a park bench watching a woman throwing bird seed. Several pigeons and a few crows arrived to devour the easy treats. Suddenly, a raven caught my eye maybe 100 feet above the activity, and he began a dive. Just before he landed, he did a fast belly roll, like a stunt pilot, and then quickly hopped to the ground. He stood there for a few seconds, and I could have sworn he was waiting for applause. He then slowly sauntered over to the where the seeds were scattered on the ground, and began to peck away.

I thought, "What if that bird had decided to land out of inspiration, rather then out of fear of starvation? What if he was inspired to do the belly roll in front of an audience, and the eating part was non-essential?"

After that little demonstration from Mother Nature, I spent the next little while noticing how most of my decisions about "what to do next" were based on perceived existential threats: "I'd better fix that taillight, or I'm gonna get a ticket"; or, "I'd better call that client, or they're going to forget about me"; or, "I'd better go to bed, or I won't be any good tomorrow"; and on and on.

Shortly, I realized that most of that kind of thinking was the result of having procrastinated after an inspiration. When I noticed the taillight was out, I was inspired to go to the auto parts store, since I was also looking for new stereo speakers, and maybe look around for anything else. Or, hey, I wonder what's going on with Sally? I'm gonna call her and see if she's still interested in getting her computer upgraded. Or, I'm sleepy--it'll feel good going to bed right now. I just hardly ever did that, instead procrastinating until circumstances required action to avert an inconvenience or outright disaster.

Since those days, I've come to see inspiration as Divine Will. It's god pointing the way to happiness and fulfillment. More than that, acting from inspiration helps to navigate away from victimizing circumstances. Acting from a space of fear and trepidation may seem to steer us away from danger, but does nothing to keep the same situation from recurring.

I've come to believe that every inspiration to action, if followed, brings us closer and closer to our highest life. It's that life filled with love, fun, and creativity--a life of harmony, security and freedom from worry. After all, the Universe itself sprang from inspiration--the promise of a magnificent game--a sensual existence of fulfillment and love. Inspiration is the fuel that keeps everything going. It is fear that leads to chaos and suffering, and acting from that space only guarantees entrapment in our own special hell.

As always, it boils down to choosing to live in inspiration. It's making the decision to act when inspired, and not giving in to the depravity of procrastination, as there will be no better time than NOW to act on that inspiration. The ironic thing about this is that even in the grips of procrastination, it only takes a quick trip back on the timeline to spot the original inspiration, and then from that point, act. That way, we can stay on course and live our highest life in this magnificent creation of love, joy and happiness.