This Quantum Life #108 - Fear and Choice 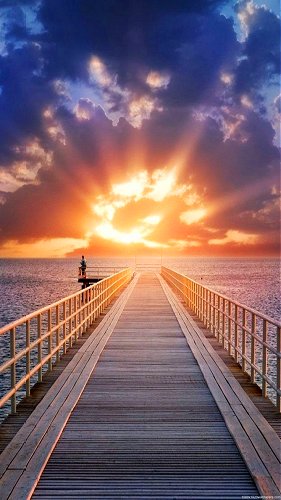 I lived in San Diego for six years before moving to this little railroad town in Southern Kansas a year and a half ago. I left the big city for several reasons--it was getting more and more expensive, less and less friendly, and although the San Diego climate is a strong attractive force, it wasn't enough to keep me from considering alternatives.

I moved to the town where I was born. I didn't stay here long after the birth, moving about a year later as my dad followed his opportunities, but my mother's parents were here, and they raised four girls. Our family would visit grandma and granddad a couple of times a year, and those visits I count as some of the happiest days of my life.

I ended up finding a house to rent about a half mile from where the grandparents used to live, and have been enjoying a quiet, serene life of solitude allowing me to de-compress from all that big city cacophony, and focus on more spiritual pursuits.

Kansans are a practical lot, with a hands-on attitude, necessitated by multi-generational family farms and a strong connection to the land. And when the mainstream and social media channels blew up with dire warnings, fearful daily death counts, and breathlessly extreme measures, people around here mostly took it with a grain of salt. Not to say people weren't concerned, but had more of a "just life" attitude.

I was proud when my county voted to suspend the Governor's mask mandate; and proud again when the city council did the same. School are opening, stores are busy, and TV sets are more often tuned to entertainment instead of what passes for "news".

I was in a local coffee shop, and the waitress was talkative. "My brother and dad run a dairy and a beef operation. They understand herd immunity. When disease comes around, they just do what needs to be done, stay positive and get on with life," she shrugged.

Again, I was proud. And it got me going on how fear can overshadow safety, derailing common sense, and shutting us off from logic and emotional control. In today's ultra-connected world and hourly news cycles broadcasting over millions of channels, we tend to forget that the producers of news reports are trying to compete with each other for the biggest share of "clicks", and will seize on the most extreme and alarming facet of an event whether it's true or not, in the hope of capturing an audience of "rubber-neckers", doom scrolling for the end of the world. The longer this type of reporting goes on, the more inflamed events appear and soon, people go into fight or flight, completely losing their minds and hearts.

The reptilian brain is the most basic of human developments, designed to automatically jerk us away from imminent threats, such as that precipice over there, that explosion of fire, or that predator on the trail of lunch. Unfortunately, the reptilian brain can be manipulated with fear, making us do, think and believe things we wouldn't normally, all with the hope of "reaching safety", until we are hunkered down in the bunker, peeking out now and then to see if it's safe.

History is replete with examples of entire societies enslaved and convinced of their safety, while the controllers exploit and murder their subjects. This is happening now in the world, and I believe we can make the choice to thrive despite it.

Fear robs us of choice. You know there is fear when there seems to be "no other way,"--in other words, no other choice. This is the big lie, and exactly where vested political interests want us to be. There's always another choice, another approach, another possibility.

In fact, the Universe itself runs on possibility. If there were only one choice, everything would end up in one big solid frozen black ball in short order. Each of us determines our experience by our choices. We choose to see peace, compassion, and love. Lo and behold peace, compassion and love begin to show up. But fear--especially the existential kind--disconnects us from positive outcomes. We see bleakness, hopelessness, and evil--the result of adrenal exhaustion from fight or flight overload.