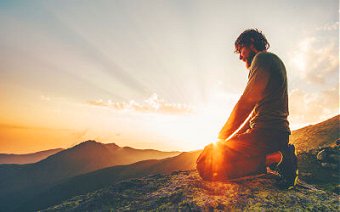 After the first day of my 8-year-long Bikram Yoga practice, I realized that if I can stick with this thing, it's going to change my life. This was because I found it so grueling--the 105-degree room, the strenuous poses for 90 minutes--that were I actually to become able to do all the poses, it would completely change my body and my health.

After about a month, I was able to get through some of the poses, but found myself groaning and whimpering, not aware that I was disturbing the class. After class one day, my instructor sauntered over to me and said, "We are all aware of how hard you're trying," he deadpanned. I suddenly got the message about how my personal drama was distracting the class. From then on, I kept my suffering to myself, and became more mindful of how I was being with my practice. I stopped forcing it so much, eased up on the body, and started working on relaxing into the poses, despite being as I claimed, "the second stiffest person in the world".

After about three months of daily practice I was able to get through the entire series of 24 asanas (poses), and after a year, most of my painful physical symptoms were gone. Going to class became a habit, and I actually came to enjoy sweating it out and finding new ranges of motion in my body.

After eight years, I felt like I had plateaued with my practice, and stopped going to class. I had all sorts of "reasons", but the one reason I never acknowledged until just recently--ten years later--was I didn't know how to allow more change in myself.

The "plateau" I was claiming was really just deep resistance. What was I resisting? Me as Creator. There was always some distraction "out there" creating an illusion of power and control outside my own auspices. But deeper than that, I deferred causality away from my own personal power, because way down in there, I didn't feel worthy of love.

When it came to embracing the reality of an unconditionally loving Infinite Creator, I would tense up and close down out of habitual experiences of pain and distrust. I had concluded that because there is pain in the world, God didn't love me, and I was a sort of fugitive from that love, unable or unwilling to see it was all just some drama I was playing out to demonstrate how undeserving of love I was.

In Stephen Pollitt's book, Heal Thyself [PDF], he makes the point that were we to simply allow the blessings, allow the gifts, allow the miracles, we would indeed become whole and restored--transformed into the unconditional loving presence of the Infinite Creator. It is the resistance to allowing that wraps us in this painful veil of tears, and if maintained over time, it is the reason for suffering, and the reason for death itself.

Pains and discomforts become the signposts of our resistance, and if diligently pursued, acknowledged, opened and allowed, transformation can begin.

Spiritual adept, Miranda MacPherson, speaks of completely abandoning her meditation practices, teachings, and rituals because they seemed like validations of her disconnect from the Divine. She says, "All I could do was say, 'Help'." And with that small allowance, she felt herself an inseparable part of a divine universal consciousness.

By being with the pain, being with the irritations and discomforts inherent in the game of separation, and by deeply and unconditionally allowing the transformation of these illusions into the pure light of Divine Love, we can reap the relief, the joy, and experience the divine being that is our birthright. It is, after all, who we are.