Report No. 16 - The Self-Esteem Illusion I watched an interview with Amy Chua, author of "Battle Hymn of the Tiger Mother." The point the interviewer zoomed in on from the book is that parents these days are so concerned about a child's self-esteem that they "over-reward" them for doing the least little thing right. Chua maintains that children should earn their self-esteem by doing difficult things well that require skill to do them. The reward-for-least-little-thing-right thinking I believe comes from pet training. All a dog has to do to get a treat is sit down, come when called, or rollover. You train cats in the same way, although much more strategically. Our big tabby cat, Ralph, believes he is training me to do what he wants, and I'm happy to do it because when I do what he wants when I want it, it trains him when to ask (such as for food and going outside).

But, children are not pets. They are a part of yourself, and like yourself, they do not need constant reinforcement to do what they probably would do anyway. I don't believe humans are wired to fail--it's an evolutionary imperative, for one thing. A person may appear to fail at something, but they'll keep trying until they succeed; and if they continually fail at the same thing, they are getting some sort of success out of it on the back end, guaranteed. If they give up, it's because they've changed their definition of success.

More accurately, humans are wired to see success in every action they take. Some actions may seem futile to some, but they keep on doing the action, looking for some way to make it a success, or to re-evaluate the situation so that it becomes a success. 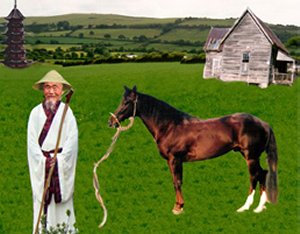 It's like the ancient Taoist parable about the old farmer who had worked his crops for many years. One day his horse ran away. Upon hearing the news, his neighbors came to visit. "Such bad luck," they said sympathetically. "May be," the farmer replied. The next morning the horse returned, bringing with it three other wild horses. "How wonderful," the neighbors exclaimed. "May be," replied the old man. The following day, his son tried to ride one of the untamed horses, was thrown, and broke his leg. The neighbors again came to offer their sympathy on his misfortune. "May be," answered the farmer. The day after, military officials came to the village to draft young men into the army. Seeing that the son's leg was broken, they passed him by. The neighbors congratulated the farmer on how well things had turned out. "May be," said the farmer.

We have no way of knowing what the consequences are of a particular success or failure, so basing one's self-esteem on such illusory concepts is pointless. Thus, by accepting the truth of the illusion of the success-and-failure model, the entire question of good or bad self-esteem is rendered moot.

The other major factor entering in to what we call self-esteem is the judging of self against the expectations of others. Children are particularly susceptible to this form of failure, as the expectations of their parents sets up the link between self-esteem and success/failure. You're bad when you "fail," good when you "succeed," where failing or succeeding depends on the accuracy with which the child can judge or estimate the expectations of the parents. I believe this is all wired to survival strategies of the young. They must not fall out of favor with the source of their nourishment, and they learn quickly the difference between a smile (which is rewarded), and a frown (for which there is no reward).

Thus, the habit is formed to look outside one's self to ascertain other's expectations in order the judge one's own success or failure determining the level of one's self-esteem.

I caught myself the other day with a picture of my mother in my head telling me how to vacuum correctly, and I was actually changing my behavior to please her. She's been dead for 15 years, and yet here I was still trying to be a success in her eyes, so I could have good self-esteem.

These are habits of thinking. They are not the truth. These habits are tricky, though, and you have to be on the lookout for them, because expectations can be easily wrapped up into a couple of "code words", or memes, that can be used to manipulate behavior. This is especially rampant in politics and marketing. You are a "success" if you buy this after shave; you are a "winner" if you buy this brand of car; you are "smart" if you buy this baby food; etc., etc., ad nauseum. The implication is--because of the success/failure dichotomy--if you don't buy these products, you are a failure. I went through one phase a few years back where I specifically refused to buy any products I saw ads for in retaliation for all the years of manipulation before. Of course, I snapped out of it when I realized I'd been manipulated into the retaliation.

By being aware of these types of memes and their manipulative power, you can simply step outside of the whole game of "want success/don't want failure." My spiritual teacher kept making a point to me for a few years about preferences. "You don't WANT something--you prefer it," he'd say. I couldn't get the difference for a long time. Of course I prefer what I want. But this was his point. By preferring, you can be happy with something not of your preference--it's not such a binding concept as wanting.

"The world suffers because it wants," he'd say. "Change the world by changing your preferences." Hence, by preferring something like world peace, you are allowing what is not world peace to be there so that it doesn't form a polarity. By strongly wanting world peace, you add energy to its opposite. The basic truth of the matter is that there IS world peace, otherwise how would we know the difference?

So winding back down to self-esteem, the basic truth is that anything we do is a success, because just being is a success as far as the universe is concerned. We are spiritual beings having a physical experience, so by just showing up, you're perfect. You cannot do anything wrong other than what you or society have judged to be wrong.

The only preference the universe has is that you BE. Ultimately, any expression of self is an expression of god, because at the very center of our Being is a direct connection to the Divine. Just like Jake and Elwood Blues--we are all on a mission for God. What more self-esteem can there be than that?