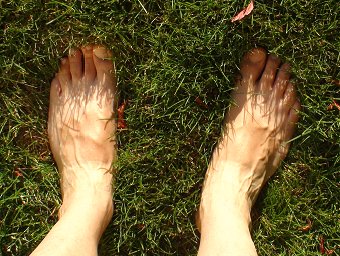 Today it was a warm, luscious morning, so I decided to eat my breakfast outside. I had moved one of the patio chairs yesterday onto the grass to make way for the sprinkler, so I decided breakfast would be nice sitting in that chair.

I walked onto the lawn with bare feet. I hadn't been barefoot yet this year because the weather here had been so cool and wet, so the sensation of bare feet on grass was, well, odd. I suddenly felt like I had stepped onto the back of a vast animal--a gigantic living, breathing creature.

I felt my heartbeat slow, my back relax, and I took a big, deep breath. It was the Earth greeting me in all her bioelectric power. As I sat eating with my feet planted in the grass, it felt like I was feeding the world. After all, I had completed the circuit and plugged in my humble feast to everything hungry in the world.

So, I decided to write this article with my feet on grass-laden earth, in hopes that enough of what Mother Earth has to say to me I can hear and put into words.

She immediately reminded me that it was She who healed me from an extremely stressful and soul-numbing encounter with what I have called the "Metaphysical Marines," otherwise known as Scientology. Yes, I was in a cult, but at the time I joined up, I was a tenderfoot 20 year-old, with world-changing visions and a rebel's heart. But after 10 years of power playing in a group where talk of God was literally considered a dramatized implant, I slowly became aware that I was missing something.

Soon my rebel ways were turned back on the group, and I found myself not only out of a job, but out of a place to live, with hundreds of enemies who thought nothing of wishing me dead. At least, that's the way it felt as I pitched my tent in a state park, hiding from larger-than-real adversaries who could at any moment lunge out from behind a tree, eyes red with anger and felonious intent.

I remember how re-assuring it felt to lie down on the earth. There was something telling me everything was going to be okay. I now know it was Mother Earth.

My wife and I moved from park to park, since the time limit was one week; but during that time, and I think mostly unbeknownst to me, I was being repaired--healed of obvious emotional traumas, and those I didn't know I had. 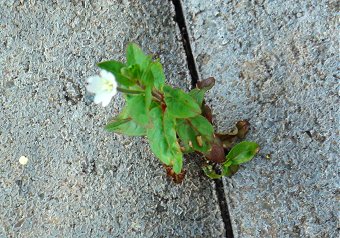 We met up with itinerant cable company workers installing the first cable TV wires along Highway 101 north of L.A. There were big bonfires on the beach at night, rough language, but lots of laughter and open hearts. We all lived with Nature--it was just part of the scene.

The time came to follow an opportunity. I heard from one of the campers that there was a great music scene up in Portland, and she even was offering her house up there till we could get on our feet. So, we packed up the rickity old Toyota with a blown head gasket, and made our way slowly to the promised land.

After we arrived, things started to look a whole lot different. The generous "friend" turned out to be a coke head, who was prone to outbursts of rage, and as things proceeded downward in our relationship, it wasn't too long before my wife attempted suicide, and as I returned from the hospital, all our stuff had been strewn about on the front lawn.

As night fell, I stuffed everything back into a bag, set up a tent several hundred yards from the house, near a potato plot, dug up some spuds, cooked them over a small fire, and laid down to sleep in very black darkness. I laid there on Mother Earth, remembering recently read words from James Clavell's Shogun. Something like, "When the Samarai reaches his lowest point, he rejoices--for the only way is up." I knew I was at my lowest point.

The next day, I was strangely energized. I hoisted the stuff over my back and grabbed a bus back to the hospital. I spilled my guts to the social worker there, who performed what I consider magic. Within eight hours, we were in an apartment, had food for a week, and after a call to Kelly Services, I had a job starting the next day.

We eventually got our own cottage up near Mt. Hood in the forest. I got a car and commuted two hours each way to Kelly jobs. Each day, as I drove home and reached the forest line, my body relaxed, I took a deep breath, and gave thanks for Mother Nature--for I was sure if it weren't for Her, my life could have very easily ended badly.

Ever since then, I've made it a point to make Mother Earth a part of my experience. I believe there is a true intelligence and love emanating from Earth, and we all can literally plug in to that love and intelligence by simply taking off our foot coverings, and making contact.

For the book, Earthing by Dr. Stephen Sinatra, there was considerable research done about using physical earth contact as a healing modality. What Sinatra has consistently found is that the simple act of going barefoot on the ground, or lying on the ground: 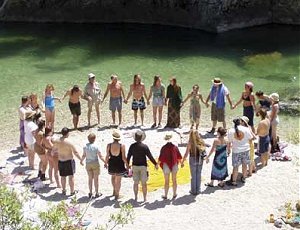 Because we are so intimately connected with this cosmic individual, rotating leisurely around a star, the mere act of noticing what we notice when in direct physical contact with Her, can lead to profound insights into ourselves, our society and the state of the planet.