MOVIE REVIEW: What the Bleep?

Adopting the formula of the docu-drama á la the History Channel specials, this full-length movie about quantum physics would seem like it was heaven sent for science geeks, but hardly a subject for a dramatic story line. The fact of the matter is that this movie is not just for geeks. It contains vital information for anyone living in this physical realm--or any other realm for that matter.

The film stars Marlee Matlin as a photographer with some heavy existential angst--so much so that she's on medications presumably for depression. Her hearing impairment acts to amplify her overarching question of the meaning of life, and seems to virtually shout out the condundrum of Is This All There IS?! As she drags herself from one boring photography shoot to another, she is met by odd circumstances and shamanistic visitations that send her further down the existential rabbit hole.

All this is intercut with interesting (and sometimes hardly scientific) commentary, interview style, about quantum physics by a fascinating array of personalities. There are physicists, of course, a neurologist, a theologian/physicist, a couple of physics professors, and even the cosmic presence of Ramtha being channeled by J.Z. Knight. Each, from their own viewpoint, attempts to explain the strange and wacky world of quantum physics. 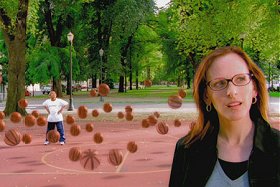 As the movie progresses, Matlin reaches a catharsis while photographing a wedding, gets drunk, and presumably makes a night of it with a man she meets at the reception party. This leads to a confrontation between her evil self-destruction and her emerging self-love as it begins to blossom as a result of her quantum experiences.

Being a Virgo, I'm especially attracted to documentaries, and this one was enthralling. I've also read a lot of metaphysical material, and have always been a science buff, so the movie was really required viewing for me. But what was most inspiring about the film was that somebody actually made a film about this stuff, and figured it would sell! The reason, I think, is that if you've done any thinking at all about the meaning of life or spiritual matters, what is being said here is shocking.

The shock value is especially keen when we see deep quantum physicists saying with a straight face that what we consider as solid reality is anything but, and nothing actually exists until the human mind decides that it does, and before that there is nothing but potential. What has been called "particle physics" is effectively debunked in the face of quantum physics. Basically, that there is nothing solid at all--and the seeming solidness of things is merely opposing electrical potentials built up among waveforms created from the decisions emanating from human minds. There are no "atoms." That's old school. But there are "energetic potentials." 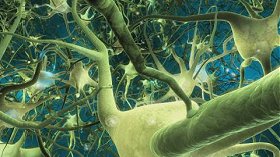 The movie explores further the complex neurochemical reactions that happen in the human brain cascading from our decisions and ideas. With "quantum-ness" fully in mind, human experience becomes a pretty damn arbitrary set of perceptions that have been agreed upon by millions of minds over long periods of time. Our thoughts and decisions directly cause all our physical ups and downs, including all diseases, joys, and emotional states. This, of course, flies in the face of this ramshackle consensus we call physical reality.

Ultimately, this is a movie about freedom. We are all free to think our own thoughts and to thus create our own reality. This is now a scientific fact. The theologian being interviewed in the movie makes a crucial point that what we perceive as "out there" has been construed to be "happening to us" as though it was created by something else--that the entire paradigm of "effect thinking" has stolen our personal power. The fact of the matter is that everything that happens "to" us, is a result of a decision we have made at some point in our experience. It is a simultaneously horrifying and liberating concept, but one that is now proven scientifically to be true.

So, it's "two thumbs up" for "What the Bleep?." I'm especially excited that the movie can also be a great teaching tool for high school seniors and college students, setting their minds in a direction and level of truth unknown in generations past. Find "What the Bleep?" at Amazon.com.