This Quantum Life #113 - As The Path Unfolds 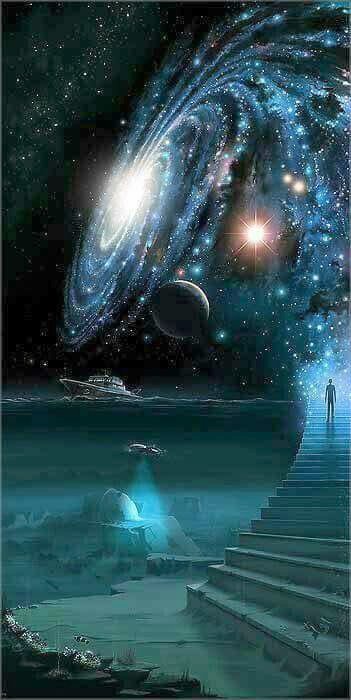 We've all had moments in life where it seemed an overseeing force, or maybe a being, intervened in what could have been a dangerous, or even fatal event. This intervention seemed to "come out of nowhere" and is forever etched in memory.

One day I was walking home from the shopping center after having my daily cup of coffee. I came to an intersection crosswalk with my eye on the "don't walk" sign, since I was in a bit of a hurry. The sign switched to walk, and I immediately began to step off the curb. Right at that moment, I felt a firm hand on my arm gently pulling me back, just as a city bus whooshed up to the bus stop right in front of me, having ignored the traffic light. I could feel the bus outside rear view mirror sweep past my nose, as it braked. I swung around to see who grabbed my arm, only to see no one there. As I ran the event back through my mind, I realized I had been saved from certain injury, as the bus was going too fast and had overshot the crosswalk.

I've had several other turns of events that felt like interventions, that had events played out without it, there would have been major inconvenience, or outright physical harm.

I've often wondered if the things I've worried about, but never happened, were really memories of times things did go awry, but this time I didn't take that road.

On the flip side, I've also had vague feelings of unease just prior to a major inconvenience or injury, leading me to believe that the body has a sort of built in predictive response around future events. Scientists have shown this to be true in experiments, where physical bodies seem to "sense" danger or intense events up to 10 minutes before they happen, as dramatized in the movie "Star Wars", where Han Solo "has a bad feeling about this".

These kinds of "alarms" can put us into flight-or-fight, riveting our attention into the present moment with senses full on.

After nearly seven decades of life here on the planet's surface, and stepping back for a long view of my life's trajectory, there is a profound sense of "someone looking after me", I've most often attributed to angels, ancestors, or other higher beings. But lately I've been entertaining another option. Maybe it's all just me.

This is not to say angels don't exist (I wrote about one such interaction), but more to say that we exist on many levels, or dimensions, with temporal life down here on 3rd dimensional solid ground being but a small fraction of our experience, much like the human eye only seeing a tiny sliver of the light spectrum.

As infinite spiritual beings, part of us is residing outside of time and space, which could imbue our temporal lives with a sense of being directed by a higher force. As quantum physics is so fond of pointing out, the "arrow of time" theory has been overthrown by the observation that the apparent linearity of time is actually an arbitrary construct of the mind. It seems real only because of acculturation and other social conditioning. And that we perceive a steady march of events from childhood to seniority in order to share our experience with others, and to play success and failure games with the ego.

The unfolding of our physical life experience is the story of how we are being. The "what" of our Self, is reflected in the "who" that is having our experiences.

The choices we make describe the edges of who we are within the field of infinite possibilities. By observing those choices against the backdrop of our innate infinite nature, we see our self-imposed limitations.

In the practice of Access Consciousness, one exercise is to answer the fulfillment of a choice with the statement, "What else is possible?", creating a portal to greater and greater expressions of who we are.

As Alan Watts has famously said, "Deep, deep down, far, far in, you are the universe." And that universe is an ever-expanding field of possibilities, reflecting the infinite nature of what we are.

During this time of extreme social manipulation and control is the perfect moment to remember that field of infinite possibility, answering every limitation with, "What else is possible"? And in so doing, allowing the unfolding of the highest and best of who we have become. In this way, we transform the world into a true reflection of love, compassion, respect, and honor, befitting our highest, grandest, most incredible Self.